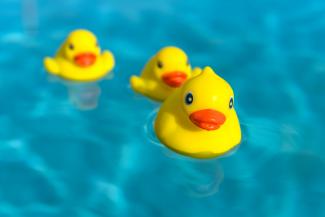 Bathtubs, the stock market, and where to go from here

When the Great Recession hit just over a decade ago, investors faced an immense challenge as the S&P 500 lost about 50% of its value and even a diversified portfolio was down approximately 30%. Let’s face it: it was a scary time.

Occasionally, I go back and read my TandemGrowth Perspectives newsletters from that time because I think it is helpful to remember and learn from the past—not only on an intellectual level, but also on an emotional level. I remember a number of clients that had been planning to retire in the coming years and who had felt certain they would never be able to retire!

I’m happy to say that the outcome was much better than they had feared. The benefits of being goal-focused and planning-driven investors truly came through. Why? Because we did what Nobel Prize-winning economist Dr. Daniel Kahneman calls system two thinking. We invited each client into the office, calmly assessed the impact of the recession on their financial plans, and made decisions rationally—not emotionally. There were multiple options to consider. They could still retire when they had planned, just on a bit less income. They could retire two or three years later than planned and on the same income goal. Or they could increase the expected return on their portfolio by accepting more equity exposure and increasing the odds of funding their goals as originally stated. (As you might guess, no one chose this last option. While increasing exposure to equities after prices have declined 50% is quite rational, it’s not a tactic that instills great confidence in most investors!)

Once the markets had recovered, most of our clients were able to go right back to their original goals. But what would have happened if they had acted emotionally and changed their portfolio? They would likely have fallen even further behind their goals, struggled with when to “get back in”, and fulfilled their fears of never being able to retire. The investors that did well didn’t react to the market—they acted on a financial plan.

Guilty as charged! We sometimes feel like a broken record when we talk about rotating asset classes, diversification, and the importance of making your defense as strong as your offense when investing. And yet, in a world filled with the loud voices of the media, I truly believe that education can help every investor manage their behavior and stay on track toward their goals—no matter how the market is behaving at the moment.

When the Dow dropped 800 points last week, the media was quick to cite the reason—for the first time in over a decade, the bond market had “flashed a warning signal” that has predicted past recessions (an “inverted” yield curve). Once again, our phones were quiet. Of course, the drop was relatively minor—just 2-3% overall, and a far cry from what we experienced in 2008/2009. But I still found myself preparing for someone (anyone!) to call me so I could talk about bathtubs.

Picture a bathtub where all of the water is concentrated at one end and is overflowing. This is what it’s like when people are excited about one asset class or sector of the market. It is the classic definition of lack of diversification: the concentration of investment into one area. In 1999, the concentration was in tech stocks. In March of 2009 (after the market fell) it was in cash. Today, there may be an overconcentration in large, US growth stocks. Regardless, when investors abandon a diversified approach, prices in the asset class get separated from underlying value, and the market becomes ripe for a correction or pullback.

During the pullback, the water sloshes back to the other end of the tub and causes other asset classes, which are relatively cheap or viewed as “safe,” to rise in value. Last week, as equity prices were falling, money was flowing into bonds, reducing yields further and increasing the value of bonds. It was 100% reaction. And yet a 3% decline in the equity market is pretty common, occurring more than 300 times in the past 100 years. But now that the numbers have grown, it can sound scary!

At TandemGrowth, our approach to building diversified portfolios focuses on allocating capital to asset classes that have positive expected returns. That approach enables our clients to fund their most important goals, and it allows us to manage the “waves” by playing defense with fixed income and other non-correlated asset classes. This means that, in general, when one asset class rises, another falls. When equities drop due to a “flight to safety” or poor economic environments, the bonds in a portfolio are often one of the most effective ways to hedge equity risk. The same converse movement is true for other asset classes as well. Small caps and large caps. Emerging markets and established markets. International and US stocks. By owning non-correlated assets, your portfolio is more likely to hold up better in many market environments. You may not see the dramatic highs of a roaring bull market, but you also won’t be devastated when the inevitable bear market comes around the bend.

The following Periodic Table of Investment Returns illustrates how asset classes move over time. Covering the time period from 2004 to today, the table shows annual returns for ten asset classes, ranked from best to worst. It’s a great reminder that no asset class is the clear winner over every time period, and that diversification is the key to building sustainable wealth:

What’s the most important takeaway from all of this market discussion? That there’s always a winner somewhere! That’s precisely why asset class diversification works so well. It’s also why smart investors can look at every market downturn as an opportunity. During the recession, too many investors retreated to the only asset classes that were up at the time: long-term government bonds and cash. But those who had the wisdom to invest when prices were at their lowest were the winners over the long term. (This article by Larry Swedroe does a great job of explaining the value of counter-cyclical investing and why you can expect better returns by investing during bad economic times.)

All that said, I am not forecasting a recession. We are not forecasters; we are holistic wealth advisors.   The markets are still close to all-time highs and, regardless of what they do next, I’m confident that our approach to asset class diversification is exactly what’s needed to help our clients take advantage of market opportunities while keeping risk at reasonable, palatable levels. Remember: if your goals have not changed, it is very likely that your investment policy should not change. Our team is here to help you maintain that disciplined approach to investing—no matter which way the market may turn tomorrow.