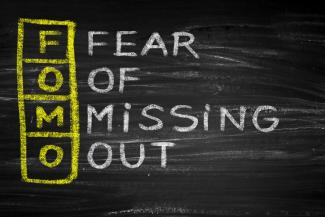 The fear of missing out. We’ve all experienced it. In fact, it’s so prevalent that it even has a popular acronym: FOMO. And while FOMO probably doesn’t create disastrous consequences in most of life, for investors, it can be the thing that turns a solid, long-term strategy on its head.

In today’s environment, FOMO can be especially problematic. Adding to the challenge is the media cycle around next year’s US Presidential election. We’ve been here before.

In the fall of 2016, everyone seemed convinced that the US Presidential election would have a dramatic impact on the market. A solid half of the people I spoke to told me they wanted to shift their strategy in case Hillary Clinton was elected. The other half wanted to do the same in case Donald Trump won the White House. Luckily, I was able to explain to investors in both camps why making a change would be a mistake. The result: not one client changed their appropriate long-term strategy. Since November 4, 2016, the Dow has risen from 17,888 to a record-breaking 27,359 earlier this month. The S&P 500 is also higher than ever, up from 2,085 just before the election to a high of 3,010 just days ago. Those who stuck to their strategy benefitted from the rally.

Of course, many, many things have come together to create that very welcome market advance. Things like an expanding global economy, rising corporate earnings, lower unemployment rates, the GDP, and other key economic indicators—none of which makes for very exciting dinner conversation. Instead, it’s the sensational stories of “home runs” that we often hear from the mouths of our neighbors, our colleagues, and the media that tend to prick up our ears and spark our interest.

Just last week, I got a call from a client who was concerned about his portfolio. The reason? “I’m not keeping up with the S&P 500, and those stocks are on fire!” He went on to tell me that he’d been at a party with a friend who apparently owned a crystal ball (my words, not my client’s) and had put everything he owned in the S&P 500 recently. His gains have been tremendous. The friend is on cloud nine, and yes, my client is feeling the FOMO.

I’m not surprised. His friend has done extremely well, but he got lucky with his timing, much like a big winner in Las Vegas will get lucky. Sometimes. But that sort of luck simply doesn’t last. Here are three things to keep in mind to help keep FOMO at bay and keep your investment strategy on track:

If you’re struggling with a little FOMO, don’t feel bad. Back in 2002, Daniel Kahneman, a Princeton University psychologist, was awarded the Nobel Prize in Economic Sciences. What he and his colleague Amos Tversky discovered was that, more often than not, people base their decisions on factors economists traditionally don't consider—like FOMO. In other words, you’re not alone. Even as an experienced financial advisor, neither am I. As Kahneman discovered, our drive to make decisions based on emotions is simply human nature. That’s precisely why our team applies the rules of evidence-based investing to every portfolio we manage. This approach keeps FOMO at bay and keeps your long-term strategy on target. None of us knows what the market will do tomorrow. Even if we’re sure we have all the facts, chances are the market will act and react in unexpected ways. Your best defense is to build a strategy based on your own investment goals—and to stick to it.