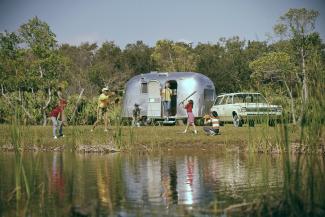 "Are we there yet?" Ever notice how in the midst of experiences time seems to drag? Read on to learn how having clarity and confidence in times of crisis is paramount.

Are we there yet? I wonder how many parents have heard this coming from the back seat of a minivan. When I was growing up, we didn’t have a minivan—back then it was the station wagon. I was the youngest of three boys.  We had a yellow station wagon with a third seat in the very back—I think it even faced backwards. We took classic family trips, driving across the country in our yellow station wagon with our pop-up camper. My brothers and I were the kings of the KOA campground. My middle brother and I would take off when we arrived leaving my oldest with the job of helping Dad crank up the camper!

Yellowstone National Park is over 2,000 miles from my home in south Georgia. My parents figured out early on that if we were going to be driving from south Georgia to Yellowstone, they better have a strategy to control three wild boys in the station wagon. They put one of us in the front seat, one in the middle seat, and one in the seat in the very back. Being the youngest, you can imagine which seat I got. Yes, the seat in the very back facing backwards. And yes, I am sure my parents heard “are we there yet?” a lot on the trip…probably before we even got to Atlanta, which is about 10% of the way there. Sometimes on these trips, it seemed like we would never get there.

I have been thinking about this lately as I read headlines about people who are fatigued by the constant coronavirus news or “shelter in place” or wondering how long the market will misbehave, etc. And if your income has been affected or you lost a job where every day is a stressful one, it can really wear on you.

I am reminded of the Great Financial Crisis (GFC) of 2007-2009. An acquaintance once told me they lost 10 years of savings but not to worry, the stress took ten years off his life, so he didn’t feel he needed as much money anyway! While real estate prices started declining, subprime mortgages and economic activity began showing weakness in late 2007, it really got serious in March of 2008 when Bear Sterns, an 85 year old investment bank, was on the brink of collapse and sold to JP Morgan Chase. The situation deteriorated even further with the Lehman failure in September of 2008. Many people do not remember this, but the unemployment rate peaked at 10% in October of 2009—10% is mild compared to what we are facing in the short-term today.

For more on this, check out There will not be an "all clear" sign.

Like many of you, I remember going to the office in early 2009 wondering are we there yet? Like my trip to Yellowstone, it felt like it was taking forever. Now, when I look back with a clearer perspective, just like watching my kids grow up or my 34-year career, it really went by pretty fast, in hindsight, didn’t it?

Use the Past to Learn, Use the Future to Motivate (dream), Use the Present to Experience

The other thing that I reflect on about the GFC are the lessons learned. I won’t bore you with them here, but at the 5-year anniversary of the Lehman collapse we hosted a TandemGrowth Conversations event where I presented the valuable lessons learned. I also believe the situation we find ourselves in today will provide great learning that can propel us forward. This is nothing new. Persist, learn, and innovate is what free market economies do during difficult times. The seeds to the U.S. being the world’s largest exporter of oil (something unheard of just 20 years ago) were sown during the oil embargo and crisis of the 1970s.

Now let me take you back just a few months to News Year’s Day 2020. You may have been setting New Year’s resolutions or looking forward to this year’s vacations. I was anticipating living in Key West for the month of May and reaching the exciting business goals that the TandemGrowth team had planned in the new year. The news media was worked up about trade wars, impeachment, and Bernie vs Biden. We heard about a virus in Asia, but maybe we thought it was not that unusual as we had seen other viruses originate there before. We have also seen a few people wear masks before in public places and may have thought in the past that it seemed kind of strange.

Then it happened. It was no longer across the globe—it had arrived here. (Of course, it may have already been here we just did not know it.) I remember watching the SEC basketball tournament on March 11th when it was announced that the National Basketball Association (NBA) had cancelled the rest of their season. Within hours, the world seemed to change.

We have all had different emotions, fears, and reactions in the last two and a half months. I believe we need to balance the paradox that in times of uncertainty, relying on our principles and values is important and we should be prepared to adapt and change. We believe that many of the financial and investment principles we practice are timeless and have served our clients well in these uncertain times. We knew a recession was coming at some point…we (nor anyone else) knew when or why. We certainly did not expect a global pandemic and the intentional shutting down of the economy.

One final thing I learned in past crises is that many people lack clarity and confidence and need help. If you did not come into this environment as prepared as you would like or simply want a second opinion, we are happy to help.  It’s never too late to build a plan that may bring clarity and confidence.  We may not “be there yet”, but we can remain patient, persistent, and use this time to continue to learn.