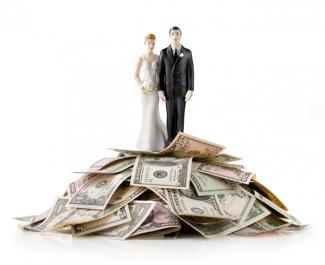 Seeking financial harmony in your marriage? Make time for the money talk

I’m not a marriage counselor or a psychologist, but boy, have I witnessed a lot of conflict among couples! As a financial planner, I’ve been helping people build stronger financial lives for almost 20 years, and I’m still amazed at the power money has to cause upset and arguments—even between the most loving, committed couples. In fact, if there’s one thing that can threaten the whole idea of marital bliss, I’m certain it is (you guessed it) money.

I have to say that I wasn’t a bit surprised by the results of a recent study on Couples & Money. Of the respondents, 41% said that they argue about money (that number was even higher for couples who are concerned about debt). And while 76% replied that they “communicate exceptionally/very well,” they also said they have difficulty talking about money—including budgeting/spending, debt, investing, and money overall. It’s no wonder many of our own clients say that the only time they ever have an in-depth conversation with each other about their financial goals and how to reach them is here, in our office, at their annual financial planning meeting. Even the most caring couples—people in committed, loving relationships—seem to avoid “the money talk.”

Why? Because money often causes conflict. And to avoid that conflict, many couples avoid communicating about money, allowing issues to fester and grow. A trusted financial planner can help by interpreting and mediating the conversation to help find common ground toward a common goal.

When I met with Ian and Jillian last week, the need for this guidance was clear. Both from similar backgrounds, they grew up in middle-class families, and they watched their parents scrimp and save to build a solid financial future. They met at the University of Georgia, and from their very first date, they seemed to agree on everything. When, 25 years and two kids later, they started arguing about money, it was a surprise to them both.

By the time they sat down with me, their emotions were running high. The breaking point had come when Ian had insisted that they splurge on a luxury Caribbean vacation to celebrate their youngest daughter’s college graduation—a “once in a lifetime” trip sailing the islands. “After all,’ he told me, “we both worked hard to put the kids through school and we deserve this for us,” he said. But Jillian disagreed. “My mom and dad did it right,” she said. “They did everything in moderation, they paid off their house early, and they haven’t had to worry about money in retirement. We only have a few years left to save for retirement, and we simply can’t afford it. Ian just doesn’t get it!”

Ian’s groan made it clear this was an argument they’d had over and over. The more they talked, the greater the tension became. My first goal was to bring down the temperature in the room by looking past this single issue toward their future. I asked them to set aside the vacation question for a minute and think—and talk—about their long-term goals. When do they each want to retire? What is their vision for that phase of their lives? What are they striving for in the next 10, 15, and 20 years?

As soon as we began working together to paint their long-term vision, the conversation began to flow again. We looked at the actual numbers and I walked them through the financial tradeoffs they needed to consider—both today and in the future. We talked about where they might want to live in retirement and what kind of lifestyle they hope to enjoy. With that picture fresh in their minds, we looked at the numbers, including their current debt, their retirement savings, and how much they contribute to their investment strategies every month. What we found was that if they continue to invest at their current pace, and wait to claim Social Security to maximize their income, they are in much better shape than Jillian had thought. I could see the relief wash across her face. Ian saw it too. “I had no idea you were so stressed about our future,” he told her. “We should have done this long ago.”

The next step was to set a realistic budget for Ian’s dream trip. Jillian was now able to see that they could afford to spend more than she’d thought, so she was comfortable agreeing to the expense. Ian was able to see that it made sense to downsize his original plan to avoid stressing their finances and potentially taking on new debt. Two hours after they had walked in the door upset and frustrated with each other, they walked out smiling. They now had a plan. Best of all, they were finally talking about money.

A financial planner can’t change the numbers. But what we can do is ask questions, help you work together to define your long-term goals, and then put a plan in place to help you reach them. Perhaps most importantly, we give you a safe place to have “the money talk.” It just may be the key to your own marital bliss, today and far into your future.

Note: Names and details in this example have been changed to honor the confidentiality of our clients.