Register for our 1/28 investment webinar!   Schedule a CallClient Access 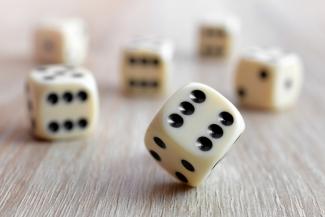 If you’ve ever been to Las Vegas, you know just how tricky gambling can be. Sometimes you win. Sometimes you lose. If you’re winning, the guy next to you admires your skill. If you’re losing, he’ll pity your bad luck. And whether you’re playing craps or black jack or a simple slot machine, every game you play gives you just enough wins to keep you smiling and playing, and just enough losses to keep the casino thriving. In the end it’s the casinos—not the gamblers—that are the biggest winners. There’s a reason they give you all those free drinks while they’re raking in your chips!

Seeing the loser’s game for what it is might be easy in Vegas, but for investors, the writing on the wall isn’t always so clear.

Just take a look at how many investors are reacting to the current stock market. The bull market that began in early 2009 has delivered more wins than most could have predicted. And of course, investors like to win. But 2018 has been painting a slightly different picture. The first half of this year delivered increased volatility, while stocks have been trading mostly flat and bonds have been slightly down.

How have investors reacted? U.S. equity funds and ETFs experienced net withdrawals of $41.3 billion, the most in a month since early 2008. For the first quarter of 2018 as a whole, net equity redemptions totaled $53 billion. February and March also constituted the very first two-month sequence of equity ETF outflows since 2008, according to Credit Suisse, with much of that selling taking place in passive investment products favored by retail investors.1 Then, just last Monday, stocks suffered their worst day in weeks in the wake of more trade-war talk from the White House.

It’s clear that investors are growing wary. And in this lower return environment, many investors may be tempted to try to “market time” or to gravitate toward more “active” strategies. After all, active strategies promise to boost returns by outperforming their benchmarks. It’s every investor’s dream, right?

Except when it isn’t.

All it takes is some real data to illustrate that choosing active management to beat the market is just as risky as gambling in Vegas. In fact, according to this recent report from Dimensional Funds, very few actively managed funds actually outperform the benchmarks. In fact, even of those that survived for more than 15 years (just 51%), only 14% were bona fide ‘winners’ who both survived and managed to outperform the benchmarks.2

Plus, while it seems straightforward to pick a fund based on past performance, according to the data, that strategy is about as reliable as assuming you’re going to keep winning at Black Jack because you’re on a streak. Dimensional’s data shows that the majority of funds that performed in the top 25% when looking back over a three-year period did not repeat that performance during the next three years.3 In reality, you would need decades of data to determine if a fund was winning due to luck or skill. Recent performance (especially during a bull market) just isn’t enough to make the call.

And even decades of data don’t tell the whole story. While the specific assets included in a fund will certainly impact whether it wins or loses, another major factor that investors often overlook when selecting a fund is the impact of costs. High costs not only reduce an investor’s net return, but they also increase the hurdle for a fund to live up to its promise to outperform. Dimensional’s research shows that mutual funds with the highest expense ratios actually had the lowest rates of outperformance. That’s not what I would call getting a decent bang for your buck.

As discouraging as that all may sound, there is good news—it just doesn’t have the same exciting ring as ‘outperformance’ or ‘beating the market.’ It’s called evidence-based investing, and it’s a strategy that uses research and data to identify factors that provide returns above the market (or ‘beta’ for us investing geeks!).

Unlike active management, evidence-based investing doesn’t rely on a fund manager’s ‘hunch,’ and it doesn’t chase returns. Instead, it looks at long-term market factors such as value, size, profitability and momentum. The strategy cuts across asset classes, invests in low-cost, tax-efficient funds, and focuses on portfolio diversification to protect against market swings. The result is a more sophisticated portfolio that is simpler, more tax efficient, and less expensive. (For a closer look at the role of factors in evidence-based investing, check out this video on our website.)

When you look at your portfolio statement for Q2 (April through June), your returns are likely going to look pretty tame. That can be tough to stomach after a year of significant growth. Combine that with headlines screaming about a global trade war, financial ‘experts’ writing that we’re overdue for a recession, and rising interest rates, and even seasoned investors can start to wonder if it’s time to roll the dice in hopes of a different outcome. Just remember what the research tells us: no matter how great active management and market timing may sound, it truly is a loser’s game.

If you want to gamble, plan a trip to Vegas and spend your entertainment budget playing craps and get some ‘free’ drinks while you’re at it. When it comes to your investments and your long-term wealth, stick to a less-thrilling adventure. Your future self will thank you—in spades!

1 https://www.cnbc.com/2018/04/27/investors-yank-most-money-from-us-stocks-since-2008.html
2 The sample includes funds at the beginning of the 5-, 10-, and 15-year periods ending December 31, 2017. Survivors are funds that had returns for every month in the sample period. Winners are funds that survived and outperformed their respective Morningstar category index over the period.
3 At the end of each year, funds are sorted within their category based on their three-year total return. The tables show the percentage of funds in the top quartile (25%) of three-year performance that ranked in the top quartile of performance over the following three years. Example (upper chart): For 2017, only 29% of equity funds were ranked in the top quartile of performance in their category in both the previous period (2012–2014) and subsequent period (2015–2017).