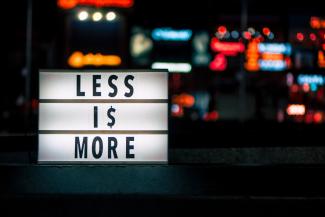 When It Comes to Investing: Is Less...More?

On December 14th, 1799, President George Washington died at his home after an illness that lasted about 21 hours. A healthy and vibrant Washington rode his estate on a cold, miserable day and, according to his secretary, decided to have dinner in his wet clothes so that he would not be late. Later that night he developed a sore throat and was feeling sick. His doctors arrived and bled him four times over the next eight hours with a loss of 40 percent of his blood.iii

There has been much debate over the actual cause of death, but there is certainly a possibility that his treatment contributed to his death. One wonders, if the advanced medical practice of his time (bleeding) was foregone and instead he got plenty of rest and fluids, if his condition might have improved and he would have survived his illness? Could it be possible that doing nothing would have been better than the treatment administered?

I have been thinking about this a little lately as it seems that we have done less trading in 2021 than in recent years…so far. In our investment process, we (or our software) look at portfolios every day to assess whether a rebalancing or tax loss harvesting trade should be considered. Rebalancing is important to ensure portfolios remain in alignment with a client’s need, willingness, and ability to accept uncertainty – what some might call risk. Based on the rules we’ve programed into the system, the goal is to look frequently but trade infrequently.

We have tons of academic research on rebalancing parameters and rules. Many of these papers contradict one another. One thought that is consistent is that a rules-based approach, one that takes the emotion out of the equation, works best. Another known is that even in today’s low transaction costs environment, there are still costs to trade – transaction costs, bid ask spreads on exchange traded funds (ETFs), and potential tax costs. And while we want to rebalance to manage risk and to increase exposure to those asset classes that may be underappreciated (lower valuations), we only want to pay the known costs when there is enough value to justify the trade. The academic literature is also clear that there is short-term momentum in markets. Therefore, having rebalancing rules that allow some drift gives us an opportunity to potentially capture some of these phenomena.

Year to date, equity markets have rewarded investors with high returns and less than average volatility. The average annual intra-year drawdown in the U.S. stock market is around 14%. Last year the S&P was down 34% in a matter of weeks! Yet, downside volatility in large U.S. stocks has been non-existent this year. There have been 50 new all-time highs this year and just 3 days in which the S&P 500 was down by 2% or worse. In contrast, last year saw 25 down days of 2% or worse. That includes the 16 days with losses of 3% or worse. The worst daily loss in 2021 is just 2.6%.iv

Don’t gamble! Take all your savings and buy some good stock and hold it till it goes up, then sell it. If it don’t go up, don’t buy it. Will Rogersv

Some things are technically very difficult but emotionally (behaviorally) easy. Some things are technically simple but emotionally very difficult. For example, academic research shows that traditional active management is not profitable for most people and therefore, to succeed in this is very difficult. Forecasting markets and the economy and attempting to gain an edge through tactical trading is difficult and, I argue, not a game worth playing as the odds of success are poor.

Contrary to Will Roger’s advice from the quote above, buying a handful of recent winners has also historically been a losing strategy. Dimensional Fund Advisors foundvi:

Active management, stock picking, and tactical asset allocation are very difficult to do successfully. They are, on the other hand, relatively easy emotionally because humans want to “do something”. We want to feel “in control”. No one wants to stand pat when they know massive inflation is on the horizon, we are overdue for a correction (10% market decline) since we have not had on in 17 months, the Delta variant will cause another shutdown, and politicians are destroying the country. And we’d certainly want to “do something” if an AFC team wins the Super Bowl! Of course, no one really knows any of this and these are merely guesses. And the Super Bowl indicator is a particularly ridiculous way to forecast markets.vii

On the other hand, building a rules-based asset allocation strategy in alignment with your need, willingness, and ability to accept risks may seem quite simple. Using academic research to build portfolios that tilt to known factors of higher expected returns seems quite simple. But both of these strategies can be emotionally difficult when you want to “do something”. You may feel the urge to “do something” in response to the latest guru’s forecast or since we are overdue for a correction or because you know that this time is different and a handful of large, expensive technology stocks are game changers and will dominate forever.

Unlike George Washington’s physicians, perhaps the best response is to do less! Of course, you can only “do less” if you have a sound strategy driven by your goals and an investment approach that is backed by solid research.  If you’d like to hear more about our goal focused and planning driven approach to wealth management, we’d love to hear from you.

You can click here to schedule a complimentary, introductory call with one of our advisors today!

iThe earliest evidence located by https://quoteinvestigator.com/2014/03/22/stand-there/ was printed in the popular syndicated gossip column of Leonard Lyons in 1945. The phrase was used by an actor and producer named Martin Gabel: At the first rehearsal of Irwin Shaw’s play, “The Assassin,” Producer Martin Gabel noticed a young actress gesticulating wildly instead of remaining motionless. Gabel shouted: “Don’t just do something; stand there.” It has since been used in many contexts by many commentators, including Vanguard Founder Jack Bogle.